Proposed tip Please edit this page to improve it, or add your comments below (do not use the discussion page).


Please use new tips to discuss whether this page should be a permanent tip, or whether it should be merged to an existing tip.
created June 5, 2012 · complexity basic · author Whiteinge · version 7.0

Git ships with support to invoke Vimdiff as a "mergetool" to help resolve merge conflicts. Unfortunately Vim struggles a bit with three-way diffs, both with highlighting the differences and with shuffling individual changes between the three windows.

This article details a simpler way to use Vimdiff as a Git mergetool.

Update: this is now a Vim plugin: https://github.com/whiteinge/diffconflicts

You are likely to encounter a merge conflict in Git eventually by merging one feature branch into another or by merging upstream changes into a local branch.

Git is quite good at automatically resolving conflicts. A simplistic explanation is that Git starts by finding the common ancestor of your local changes and the changes you are merging into yours. Git then replays the history of each lineage, making intelligent choices along the way about how and where code is added or moved or renamed. If there are conflicts that Git cannot resolve itself the file is left in a conflicted state that must be resolved manually -- more on this below as the MERGED version of the file.

The simplest way to resolve a Git merge conflict is to open the conflicted file with your favorite text editor and to manually find and remove the conflict markers, keeping the best version of the code from each side of the conflict, then marking the conflict as resolved in Git.

The default Vimdiff window layout presents quite a lot of useful information. In many cases, however, it is simply too much noise and hides the relevant visual clues you need to solve a conflict quickly.

For example, here is the default view of the conflict shown above: 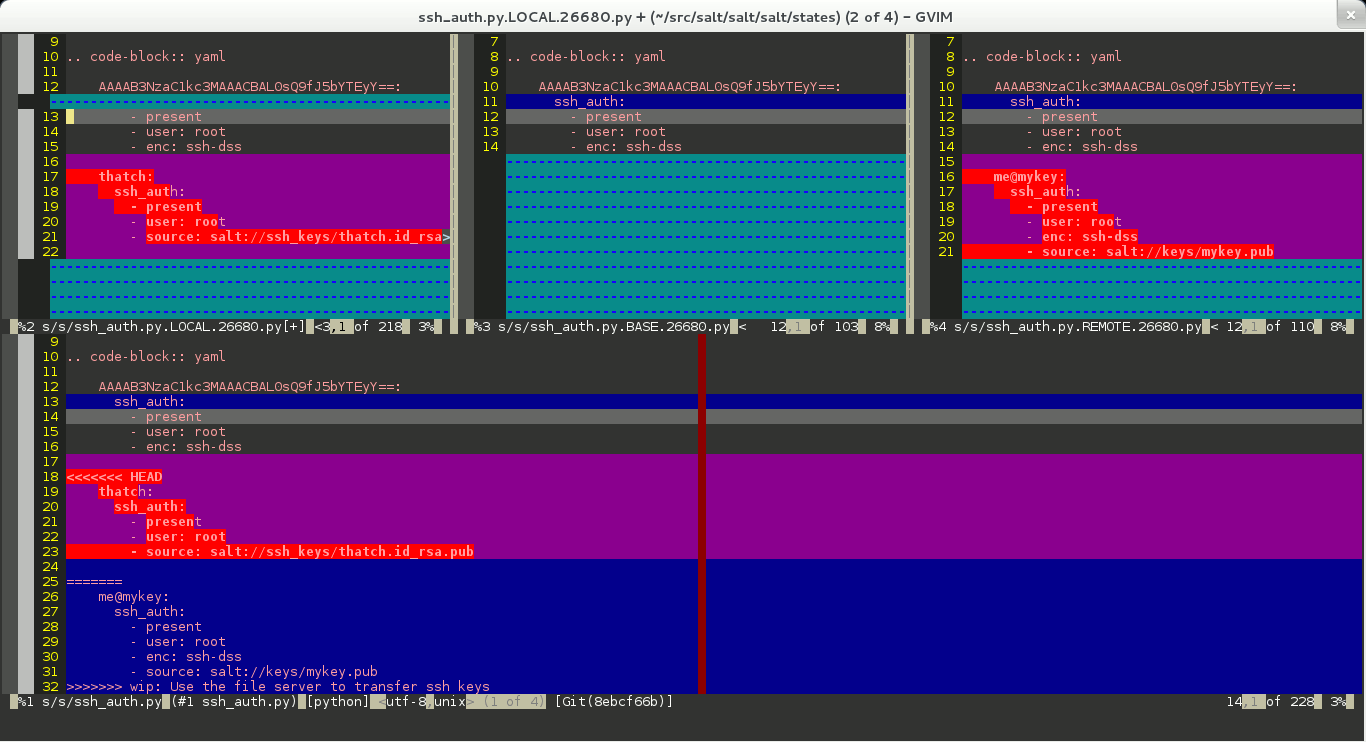 Vimdiff is an excellent two-way diff viewer and many of the helper shortcuts are geared for moving changes between only two windows at a time. Displaying differences between three (or more!) versions of a file is a hard problem to solve and syntax highlighting alone just isn't well-suited to the job.

For example, here is the same conflict as above but only diffing the conflicts themselves:

The resolution is much clearer and since this is two-way merge all of the Vimdiff keyboard shortcuts work as intended.

In order to achieve the layout detailed above we need to step outside of the Vimdiff mergetool that ships with Git, and even outside of Git itself. The "diffconflicts" script in the section below can be used as a mergetool that will then invoke Vimdiff.

Save the script below as "diffconflicts" somewhere on your shell PATH and mark it as executable (chmod +x diffconflicts). Next register it with Git as a custom mergetool by running the following commands (substitude "gvim" for "vim" if you prefer Gvim):

This script invokes Vimdiff with three tabpages. The first tabpage is a two-way diff of each "side" of a conflict. This allows the full use of vanilla Vimdiff.

Resolve conflicts in the left window; this is the file that will eventually be written to disk as the resolved file.

If you wish to abort Vimdiff and signal to Git that the resolution is not complete, exit Vimdiff with :cq. This tells Vim to exit with an error code which then tells Git that the conflict was not resolved.

The second tabpage is the standard three-way diff of the pre-automerge "yours", "theirs", and the merge base.

Finally, the third tabpage is the actual conflicted file that contains the conflict markers.

This view shouldn't be necessary but I find it is helpful to quickly sanity-check the diff in the first tabpage in case the diffconflicts script did not work correctly.

Note: the latest version of this script is on GitHub.

The similar plugins below, as well as the excellent Fugitive, do not make use of Git's merge results and either perform a three-way diff of the two parents and the conflicted file, or they perform a two-way diff of the parents and ignore Git's merge results in the conflicted file. The whole point of the above explanation is to use as much of Git's attempted merge as possible.

This doesn't seem to work. After adding the script as my mergetool and attempting to run mergetool to resolve a conflict, I get:

I do not know anything about this tip, but a quick search for "diffconflicts" in the tip shows you need to create the script, put it in a directory in your PATH, and use chmod (as well as use the git config commands shown). If you get it working, please report here. JohnBeckett (talk) 04:39, August 29, 2012 (UTC)

Retrieved from "https://vim.fandom.com/wiki/A_better_Vimdiff_Git_mergetool?oldid=40190"
Community content is available under CC-BY-SA unless otherwise noted.